Mothers in the Studio: Kati Kleimola

Creative people can’t stop creating. It’s in their souls and hearts — to take the images they see in their mind’s eye and bring them to life through paint, sculptures, or other visual art forms. Nevertheless, other aspects fall into these artistic peoples’ worlds over time. For example, parenting.


Such is the case with Kati Kleimola, a Toledo-area artist whose work is scheduled to appear at the Art Depo in Bowling Green starting May 20. In addition to filling her creative cup, Kleimola teaches art to others while also dealing with the daily routines of motherhood and family life. 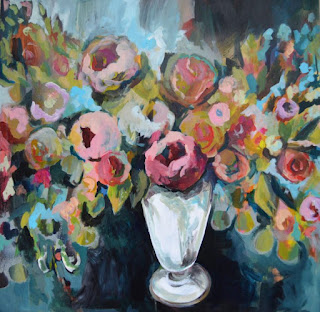 For Kleimola, her art has been a part of her since she was little.

“It’s always seemed natural to me,” she said. “My Mom encouraged me to make creative messes and to let my imagination run wild. I always knew I wanted to be an artist.”


After studying at the Columbus College of Art and Design and the University of Toledo, Kleimola started her business two years ago at the same time she taught art and was raising her small children.

“I felt the need to begin painting more regularly,” she said. “I felt like I was losing a part of me, so I started to set aside time each day to paint.”


Kleimola’s husband encouraged her to take more time to paint and even pushed her to apply to University of Toledo’s “Art on the Mall” while she was seven months pregnant. At first, she humored him. Kleimola figured she wouldn’t be accepted.

“Then my acceptance letter came in the mail, which was the push I needed to keep painting,” she said.

She appeared at the show with her then four-week-old infant, won third place, and sold all her work. After that, more doors opened for Kleimola until “artist” became her official title and full-time job. 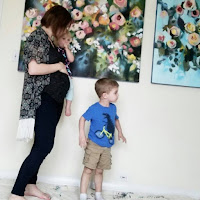 When it comes to dividing work and family, Kleimola manages it her own way.

“I would say it’s more of a juggling act than a balancing act,” she said. “There are times when my kids need more of me, so my art is put on hold so I can care for my family. Then there are times when I am preparing for a show or gallery opening and my focus is on my art.”

Kleimola credits her family for helping out during those more hectic times. As a mother and creator, Kleimola feels a bond between the two.


“Motherhood and creating are both so intertwined with who I am that it’s almost impossible to separate them. I became a mom at 20, so both roles have gone hand-in-hand for the last 10 years.”

“When I was younger and with less children, I would sometimes feel guilty about taking time to make art,” Kleimola explained. “What I’ve learned over the years is that taking the time to invest in my own mental and physical health allows me to give a better version of myself to my children.”


Kleimola is expecting a late Mother’s Day gift in the form of baby number five, due in September.


Do you know an amazing mother and artist like Kleimola? Let us know about her! Share images of artistic and inspiring moms and their creations on social media with the hashtag #FramingHappiness!