Peter DeWood is an artist and professional chef, inspired by his practice of Buddhism. The paints in the tradition of the Sumi-e brush artists, primarily on handmade mulberry paper from Thailand or cold press watercolor paper. A self-taught artist, he felt that he had to rebel against himself in a sense in order to paint in an authentic, free and self-expressed manner. He had to break through his own personal boundaries and blockages. In his own words: “When I started doing this art practice I was doing small pieces and it was very calculated and I was trying to emulate images I saw and copy styles and forms and as that grew over the years, the short few years I’ve been doing it, I’ve learned to trust myself and just let the artwork do itself.”  What I found personally fascinating is how his spiritual practice grounds him and frees him at the same time so that the art can materialize. 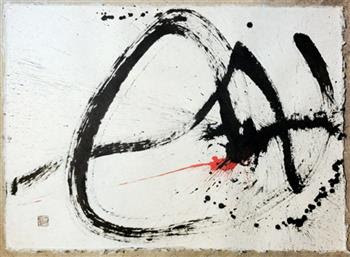 Peter takes a disciplined approach to his work and guards his daily routine in his studio. Sometimes he works for 15 minutes and other times he works for hours on end, so although the time in the studio may vary, the daily commitment does not. Often he’ll have 5-6 pieces of paper lined up and paints both simultaneously and concurrently, capitalizing on the Zen aspect of the process. He has an interesting way of dealing with creative blocks. He doesn’t ignore the block but ‘sits’ with it, meditates and allows it to work through on its own.
In my interviews, I always like to know what the artist considers the biggest accomplishment in his or her career thus far. For Peter, it was being recognized by one of the Zen master painters, Max Gimblett of New Zealand, who Peter had reached out to for critique of his work and as a result, enjoys the friendship and support of the master.
For more on Peter DeWood…