Before and After: Vivid Peacocks Get Opposite Custom Framing and Mat Board Treatments 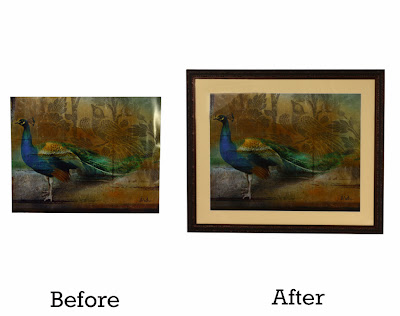 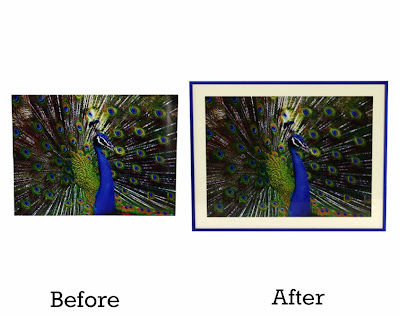 These two peacock images received very different custom framing treatments, both matching the colors and style of the particular image. The top image is more of a digital collage piece, whereas the second image is a straight photograph of a peacock. The first picture has browner and darker tones in the image, so we used frame AT3332, Antiqua- Dark Brown Metallic. The detailing in the face of the frame pairs nicely with the artistic detailing overlaid with the peacock. This particular frame is currently one of the 40 frames on sale during our 40 frames for 40 days sale! The customer decided on a natural mat board (12536 – Myrtle Beach) with 2 ¾” borders which adds contrast and separation between the image and the frame without being too bright and distracting. The finished size was 33 ¼” x 27 ¼”.
The second image received a much brighter and bolder framing treatment. The customer decided to pull out the blue tone from the peacocks feathers and use it for framing. The vivid blue frame (StandardPlus Three- Galactic Blue) matches the peacock’s feathers, while the white mat (8437-Clover with 2” borders) keeps the focus on the varying colors in the photograph. The finished size was 27 ¾” x 21 ½”.

The total for framing both pieces was $225.65! What a huge difference the right custom framing treatment can make! What do you think of the end results?