Mayer Freed, who passed away in October, 2010 at age 65, managed to live in both the practical and the artistic realms simultaneously.  He had a distinguished career as a law professor at Northwestern University in Chicago, where he also served as an administrator and spearheaded a series of international programs, most notably with the Law School at Tel Aviv University.  At the same time, he pursued his love of photography and over many years developed a keen eye for artistic composition and an appreciation for “shape as shape” and “color as color.”

Freed found subject matter at home and on his travels all over the globe.  His sensitive images of people, his documentation of places both foreign and domestic, and his still lifes are equally engaging.  In his later work, he experimented with manipulating images on the computer, creating vivid color effects.  His style shows a clear maturation toward an appreciation of abstraction, which can be seen in the photographs of items isolated from their context, such as his photographs of doorways and walls, their larger setting outside the frame.  Anyone who ever attended a meeting with Freed would have observed him “doodling,” or working out this fascination with pure shape, in intricate geometric drawings.

In his photography, Freed identified interesting buildings, facades, and architectural details, then isolated them in a way that transformed them into beautiful, often colorful, patterns and shapes that stand on their own, unrelated to the literal or specific.  The featured piece, “Shanghai Geometry,” exemplifies this technique particularly well.

When Freed framed his own work, he used thin black frames, a style typically identified with “gallery framing” because it’s versatile and works well in large groups.  The neutral color and unadorned profile will also nearly disappear against a neutral wall.  This makes it the perfect choice for an image whose main purpose is to explore shape and color.  No interference, no distraction.

We framed “Shanghai Geometry” with a black, solid-wood frame from our Infinity collection.  What is difficult to appreciate in a two-dimensional context is the drama of this frame.  At 2 ¼” deep (with a 2” rabbet depth) the moulding stands quite proud of the wall, creating a dramatic moment in a serene way.  A paradox, to be sure, but often true when bold proportion is rendered with simple line and neutral color.  In person, the effect encourages the viewer to stand directly in front of the image, to look at it as we might look through the camera lens itself, focused on what is in the frame, on pure composition, color and shape; we block out mentally and visually whatever is not in the frame.  The final touch of artistry comes from the slim reveal of the middle chrome-colored mat: a mere 3/16” line which very subtly echoes the gray horizontals in the image. 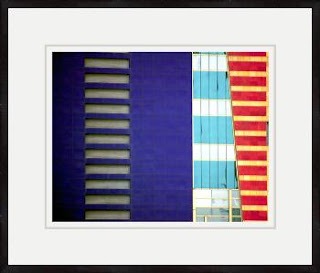