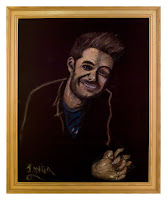 Very rarely do we experience this kind of excitement in Maumee Ohio!

As you all may know by now, a local Toledo woman, Crystal Bowersox, is a finalist on American Idol. We’ve been following her rise to the top, not only because she is local, but because she is amazing, and she used to sing at the Village Idiot where my brother Mark Mikel performs regularly. You may know Mark’s work for us from the video productions on our Framing Basics page. His music can also be found all over the web and on itunes. Joining him on Tuesdays is Everett Harris, our Accounting Assistant, backing Mark on the drums. Ev is interviewed at the Idiot and is pictured with Mark and the band on this blog article. We have multi-talented people here and we really like it that way!

So, back to the story, which all began for us last Wednesday, May 12, when I happened to enter my office through our Showroom as opposed to the Photo Dept, when artist Lisa Zook presented me with an exciting opportunity.

Our local radio station, 925KissFM had announced a request for a company to assist them with framing a Velvet Ryan to hang next to their Velvet Elvis, and as a gift for host Ryan Seacrest. So, I called in and got the job! The DJs Andrew Z, Bacon, and Sarah were concerned about getting a frame cool enough for this painting within the timeframe (1 day) they needed. Initially, the 80361 Traditional Gold was chosen but it proved not to be deep enough for the canvas, so the 573235 Allure was ultimately used.

The Velvet Ryan was presented to Chrystal last Friday morning and was a huge hit. According to my sources, the camera crew thought the painting might make the show at some point, but it hasn't just yet. If Crystal gives it to Ryan on stage, it will be fun for us to see and be a part of but if not, that's fine. We just hope she is named the next American Idol. Stay tuned!