Kulicke Update: Was he REALLY the inventor of the Aluminum Section Frame? 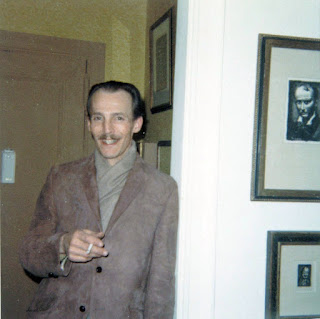 On July 7, 2009, I kicked off our Summer Celebration Metal Sale with a tribute to Robert Kulicke, creator of the original welded aluminum frame for MOMA, and acclaimed inventor of the aluminum section frame – the product on which our business was built. When I wrote my commentary, I consulted trusted sources like the New York Times and Picture Framing Magazine. What I have come to learn is that there is another side of the story; a very compelling side which has evidence of patents and a daughter’s memory of her father. So, today I would like to relate what I’ve learned about a gentleman named Donald P. Herbert, father of Catherine Yee, who contacted me last week about my blog.

This is her story, in her own words:

“My father was a frame designer. Strangely enough he got his start in Toledo , OH when he opened a frame shop in conjunction with his antiquarian bookstore in 1953. He then returned to the NYC area and opened a frame shop in 1957 in White Plains , NY . In 1963-64 he worked for Dain-Schiff and in 1965 started working for Kulicke Frames. So yes, he knew Bob personally. In fact, at one time they even lived in the same apartment building in New York City , for a time across the hall from each other. They were still speaking to each other in 1978 when I moved in with my father. By the time he died in 1982 I don’t believe that they were.”

“According to my father, the design idea developed following his attendance at a museum conference in 1967 in Toronto . During this trip he met with Dr. Harold Joachim, curator of Prints and Drawings for the Art Institute of Chicago. Dr. Joachim stated that they had many prints they could not display but would be willing to loan to galleries if there was an affordable way to frame them. Following this meeting, my dad started working on sketches. My step-mother remembers him working on them even as they traveled back to NYC from the conference.”

Ms. Yee sent me this link which is the most compelling evidence of all that Mr. Herbert was, in fact, the original designer of the aluminum section frame. http://www.google.com/patents/about?id=0QBjAAAAEBAJ&dq=3,534,490

He had a US patent as well as several international patents including Canada ,

and also Belgium , Great Britain , The Netherlands and Germany .

So, this is what I have learned about Donald P. Herbert. He was born in Manhattan in 1926. His early childhood was spent between New York and Maryland . He was not formally educated in art and design. He had a high school level education so must have learned his craft through apprenticeships.

Mr. Herbert moved to our area of the country, Toledo , Ohio in 1952, and opened an antiquarian book store at 1205 Adams Street called “Maumee Valley Book Shop”. How or why he came to this area is unclear. It was then, however, that he became interested in picture frame designing and offered custom framing services out of that location.

In 1955, he left Toledo , married Catherine Yee’s mother, and moved back to White Plains , New York where he opened another shop named “Van Horn-Herbert”.

By 1963-64 he went to work for the Dain-Schiff Gallery in New York where apparently he studied more about framing and frame design. In 1965 he began working with Robert Kulicke who invented the welded metal frame in 1960.

Referencing the chronology presented by Ms.Yee, it was in 1967 that her father started creating sketches of his idea for an aluminum section frame (including the hardware) which could be custom cut for a variety of sizes and manufactured at a low cost. She believes that the confusion in the industry stems from the fact that Kulicke Frames’ contract division was the original manufacturer of the designs, and that over the years “Kulicke the man” has been confused with “Kulicke the company”.

In 1970, Mr. Herbert sold his Canadian Patent to FrameGuild Mouldings which is now a division of NielsenBainbridge in Canada .

Mr. Herbert subsequently opened another company, Presentation Sales Corporation. In 1972, he sold the assets of this company, including his US Patent to Structural Industries in Hicksville NY . The sale of the company and technology transfer has never been challenged, further evidence that he was the originator and lawful patent holder of the aluminum sectional picture frame.

In 1982, Mr. Herbert died suddenly after a short illness.

Nielsen created improvements in the design of the hardware, which were patented in 1971. The Nielsen patent references Mr. Herbert’s 1968 patent on the original design.

In closing, I would like to state that I am by no means a journalist, nor do I care to challenge Robert Kulicke’s legacy in the industry. However, I find it interesting that Mr. Herbert is not the recognized designer of the aluminum section frame. Mr. Kulicke referenced his name in the Picture Framing Magazine interview, Jan/Feb 1990 as a salesperson who brought back the design of the hardware after a trip to Canada , however does not credit him with the design itself. Catherine Yee and I spoke on the phone on Friday, August 28th so I could try to make sense out of all the information she sent to me. I asked her if it were at all possible, that this idea was the result of a great collaboration, that possibly Mr. Kulicke had conceptualized the product while her father actually designed it, but she refutes that possibility, based on her memories of interactions of the two men at that time.

It appears that creating picture frames which could be easily assembled and disassembled was an issue that Kulicke and Herbert were not the first to try to address. In our research, we also found patent #2,654,451 issued to a Mr. John Schmidgall, applied for in 1950 and issued in 1953 which describes a modular assembly for wood frames. In my mind, the fact of this earlier patent makes it clear that neither Mr. Herbert nor Mr. Kulicke originally conceptualized the idea as applied to framing. It may be possible that they discussed this problem as framers prior to Mr. Herbert designing the solution for the metal frame specifically.

Perhaps this is why Robert Kulicke never patented this design, as stated in my original posting. He does have two other patents in his name, contrary to the claim made in his interview that he does not see himself as a designer but as a developer, and that developers do not patent their designs. The numbers are 2777 232 1957 and 3003 272 1961. The first shows a sectional drawing but is a patent for mounting assemblages within the frame. The second is for a mounting system for mirrors.

I welcome comments and additional information.